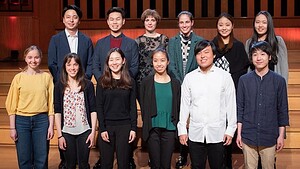 Congratulations to the 12 Finalists in the Queen Elisabeth Violin Competition 2019, announced on Saturday in Belgium. They are:

During this week the Finalists have been secluded at the Queen Elisabeth Music Chapel to learn, without outside assistance, a new unpublished work composed for this competition by Finnish composer Kimmo Hakola. For the finals next week, they will play this work as well as a concerto of their choice, with the Belgian National Orchestra, conducted by Hugh Wolff.

Watch the Final Round here, starting Monday with performances by Luke Hsu of the U.S. and Sylvia Huang of Belgium. Two Finalists will perform each night through May 25.

The Queen Elisabeth has been under way in since April 29, with 71 candidates now narrowed down to 12 finalists.

The First Prize winner will receive €25,000 and the four-year use of the 1708 "Huggins" Stradivarius, from the Nippon Music Foundation.