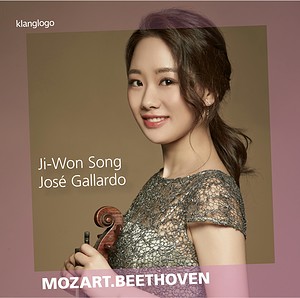 In 2016, South Korean violinist Ji Won Song won the ninth annual International Leopold Mozart Violin Competition in Augsburg and proved that she is not only brilliant as a soloist of virtuoso violin concertos but also possesses a deep understanding of chamber music. Together with her pianist partner José Gallardo, she presents a program that includes works by Wolfgang Amadeus Mozart and Ludwig van Beethoven as well as a repertoire composed later that refers directly to Viennese classical music. Pablo de Sarasate composed an effective showpiece with his Fantasy on Mozart's Magic Flute, a work that combines sophisticated playing technique with a sonorous violin tone, and Fritz Kreisler made use of a small Rondo of Beethoven as the basis for his work. The Classical works themselves are regarded as the touchstones that form an integral part of competitions and concert halls around the world today. Mozart's violin sonatas K. 376 and K. 481 as well as Beethoven's lyrical Romance for Violin in F major complete this cross-section as compositions for the instrument to which Leopold Mozart dedicated his influential Fundamental Principles of Violin Playing in the middle of the 18th century.